Skip to main content
February 08, 2019
In 2016, the Lynchburg Humane Society took the pledge and decided to lead the charge in creating a No-Kill Virginia (NKVA). “No-kill” means every healthy and treatable pet is saved. It is estimated that 15,000 pets were needlessly euthanized prior to 2016 throughout Virginia.

This life-saving goal of saving all healthy and treatable pets in the state of Virginia is becoming reality. Since the Lynchburg Humane Society started focusing their efforts on saving pets from at-risk
shelters, mentoring and training other shelters in the state, and helping make spay/neuter accessible in 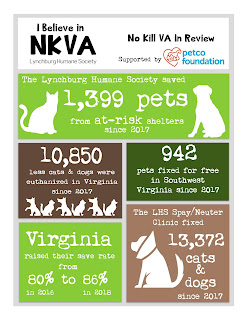 The Lynchburg Humane Society saved 1,399 pets from at-risk shelters and their spay/neuter clinic has fixed 13,372 cats and dogs since 2017, helping to significantly control the homeless pet population. With the help of partnerships around the state and the Petco Foundation, 942 pets were fixed in Southwest Virginia and 296 community cats were fixed in Amherst County, Pittsylvania County and Danville areas.

The success of the NKVA program is made possible by the Petco Foundation, in partnership with the Virginia Federation of Humane Societies, Best Friends Animal Society, Angels of Assisi and Homeward Trails, as well as, communities and animal sheltering partners throughout the state.

We need to make 2019 another life-saving year and keep this momentum going. This is just the beginning of changing the way Virginia pets are regarded. Help make Virginia No-Kill by donating and be a part of saving pets lives.