January 23, 2019
The Lynchburg Humane Society had an action-packed 2018. It was a record year for pets coming into our Center, adoptions, fostering, and saving pets from at-risk shelters.  As an organization we saved 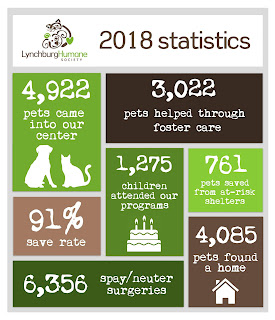 We helped 761 pets in at-risk shelters who faced euthanasia if we didn’t intervene and bring them to our Center. This included many orphaned and newborn pets, pregnant and nursing moms and pets who needed medical treatment. We gave these pets a chance at life and finding a home.

We had many adventures, some were heartbreaking, but all were life-saving and worth every moment to give so many pets a chance at wonderful, loving lives.


The rescue mission to the flooded shelters of North Carolina from Hurricane Florence brought two heartwarming stories and reminded us of the importance of doing the right thing:


This year was also about helping many pets with serious medical issues, including Sir Thomas Wyatt and Daisy:


The work and the lives we saved in 2018 would not have been possible without our wonderful community support.  Thank you for always being there for the pets.  Here’s to another life-saving year in 2019!